Mac Lozer has come to relish the relief role.

A starting pitcher much of the time at North Central High School in Indianapolis, where he graduated in 2013, the right-hander was asked to go to the bullpen for the University of Michigan.

“I pitched how I would benefit the team most,” says Lozer. “They put me in late-inning, high-leverage situations.”

In four seasons with the Wolverines, Lozer made 100 mound appearances (all in relief) and went 4-1 with three saves and a 2.22 earned run average. In 77 innings, he produced 94 strikeouts and 44 walks.

Along the way, Lozer grew from 5-foot-11 and throwing 84 mph to 6-1 and with deliveries of 89 to 92 mph was selected in the 33rd round of the 2017 Major League Baseball First-Year Player Draft by the New York Mets.

Lozer was pitching in the summer for the Indiana Bulls when he was approached by Michigan assistant coach and recruiting coordinator Nick Schnabel about coming to Ann Arbor.

“It was a perfect fit academically, athletically and socially,” says Lozer, 22. “To this day, it’s one of the best decisions of my life.”

At Michigan, he played for head coach Erik Bakich. A nutritionist and trainer before becoming a coach, the former head coach at the University of Maryland, assistant at Vanderbilt University and Clemson University and player at East Carolina University after San Jose City College attends to more than just what happens between the white lines.

“He’s an amazing guy and an amazing coach,” says Lozer of the man who runs the Maize and Blue program. “He’s a life coach. He is concerned with the full human being. He develops you in leadership skills and makes you a better future father and current brother and son. He has a perfect formula for coaching a baseball player.

“I’m glad I stayed one more year and had another year with Coach Bakich.”

Whether a player is looking to gain, lose or maintain weight, needs to know how much water to drink or what supplements to take, there is a program in place to help players maximize their bodies.

“It’s not rocket science, but a lot of hard work,” says Lozer.

The right-hander learned to work at the mental side of the game and follow many of the principles laid out by sports psychologists Dr. Ken Ravizza and Dr. Tom Hanson in their book, “Heads Up Baseball.”

Michigan did mental strength training nearly everyday and Lozer focused on concepts like awareness, confidence and releasing negative energy. In the off-season, the Wolverines attended leadership sessions twice a week.

“You have to be mentally tough in the real world. It’s truly a life skill.”

As a college reliever, Lozer needed to be prepared to pitch three or four times a week as compared to a starter who pitches once a week.

“As a reliever, you can have a bad outing one day and redeem yourself the next day and get it off your mind,” says Lozer. “It’s all about mental preparation. You want to be in that moment and not hesitant.

“It’s a synergy of mental and physical preparation. You close your eyes and take mental reps. I do a lot more mental reps than I do pitches. I make sure my confidence is at its highest point before I go in.”

Lozer credits former Michigan pitching coach Sean Kenny (now at the University of Georgia) for making him into an effective pitcher, teaching him the attack mindset while helping him develop his four-seam fastball (which has two-seam action), slider and change-up (which became game-ready in 2017).

“He’s going to do great things at Georgia,” says Lozer of Kenny. “I thank him for everything he did at Michigan.”

Staying at Michigan for four years also helped Lozer complete his degree in sociology with a sales certificate.

Lozer played baseball from age 7 to 11 at First Baptist Athletic Association. From 12U to 14U, he was with the Indiana Prospects. Coaches included his father Jeff Lozer plus Mike Nash and Andy Upchurch.

At 14U and 15U, Mac was with North Central Panther Summer Select. That team was coached by North Central High School head coach Phil McIntyre.

Lozer appreciates how McIntyre allowed him to play multiple positions during his high school career. Mac was a center fielder, first baseman, shortstop and catcher as well as a pitcher at NCHS.

From 16U to 18U, Lozer played in the summer for the Indiana Bulls — the first two years for coaches Jeff Mercer (now head coach at Wright State University) and Emmitt Carney and the last for Matt Campbell (now head coach at Lapel High School).

“The best thing about (the Bulls) is they are not going for trophies,” says Lozer. “They are developing players to match their potential.”

“She takes care of all the boys in the house,” says Mac of his mother. 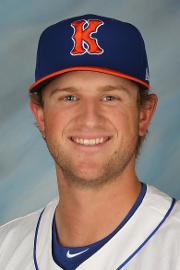 Mac Lozer, a graduate of North Central High School in Indianapolis and the University of Michigan, is a pitcher in the New York Mets organization. (Kingsport Mets Photo)