Ryan Bunnell might change the words of his mantra from time to time to stay fresh.

But the head baseball coach at Westfield High School in Hamilton County, Indiana, continues to run a program based on character, commitment, hard work and extra effort.

“Everyone has influence,” says Bunnell. “How they use that influence is up to them.”

Kevin Plawecki, who is now a catcher with the New York Mets, was a senior and batted No. 3 for Westfield in the 2009 IHSAA Class 4A State Finals then played at Purdue University before beginning his professional baseball career. Plawecki still stays in contact with Bunnell.

Bunnell likes his Shamrocks to “stay in the present” and “control the controllable.”

Knowing when the make the right play and quality at-bats are valued highly by Westfield baseball. QAB points can come from hard-hit balls, walks, hit-by-pitch, stolen bases, dirt-ball reads and other things.

It’s a philosophy Bunnell picked up at a clinic from former Mississippi State University coach John Cohen and it’s kind of thing that happened frequently in successful Westfield seasons like 2009.

Bunnell says the program usually sees up to 70 kids try out for about 50 spots on three teams — varsity and two junior varsity squads (Green and White). Having two JV units allows for flexibility and playing time. For instance, the Rocks had five catchers in the freshmen class in 2017 and just one among the sophomores.

All JV home games are played at Grand Park with some varsity games being moved there if wet weather means the Rocks can’t play on-campus. With this relationship, Bullpen Tournaments is allowed to use the Westfield varsity field for some of its summer tournaments.

Feeding the program are recreation and 12U to 15U travel teams (Westfield Rocks) from Westfield Youth Sports, Inc., plus middle school squads that play at Shamrock Springs Elementary.

“Baseball is strong here for sure,” says Bunnell.

A portion of Bunnell’s summers is spent with wife Michell and four children (Kaylie, A.J., Cooper and Beau) and coaching with the Indiana Bulls travel baseball organization.

“They have been very good to me,” says Bunnell. “We don’t practice a whole lot in the summer. The crispness of the game gets away. We need that repetition in practice.”

“These are young kids and they are still developing and kids are throwing harder than ever,” says Bunnell, who had tended to use his starters once a week during the regular season with a non-conference game on Tuesday and conference contests on Thursday, Friday and Saturday.

The past few seasons the Hoosier Crossroads Conference (which has featured Avon, Brownsburg, Fishers, Hamilton Southeastern, Noblesville and Zionsville and will add Franklin Central in 2018-19) has employed a three-game series for baseball and Bunnell has been a fan of the format.

“You get a true conference champion,” says Bunnell. “I’ll be sad to see it go (if it goes away with the growth of the conference or reduction in the number of games allowed by the IHSAA).”

Currently, the association allows 28 games plus a tournament prior to the state tournament series.

If he had his way, the season would actually expand, state tournament stages would be seeded and championships would be determined by a series or at least through double-elimination.

“It would create excitement and it would be great to see it showcased that way,” says Bunnell. “We have to stop with the one-size-fits-all approach. Each sport has its uniqueness.”

With the HCC format, the Friday game under the lights has often drawn big crowds and taken on the atmosphere of prep football.

Of course more games would necessitate more time to get postseason games in and there are already issues now where sectional games have to be played from Wednesday through Monday and still adhere to pitch count rules.

Bunnell said this narrow window, the draw and variables like weather and graduation ceremonies can put teams on one side of the bracket at a serious disadvantage.

How would seeding work?

Bunnell notes that it is done in Ohio and rankings such as those produced by MaxPreps could be used.

“There are a lot of options,” says Bunnell.

To concentrate on mental toughness, Westfield athletes take part annually in Shamrock Advantage Week. In brief after-school sessions, speakers cover various topics like mindfulness, trust building and becoming an elite competitor. Bunnell has been one of those SAW presenters. 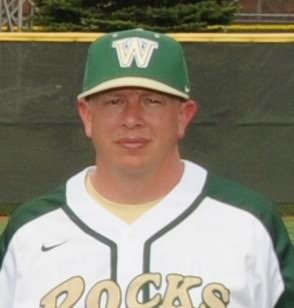 Ryan Bunnell is going into his 16th season as head baseball coach at Westfield High School in 2017-18.

24 thoughts on “Bunnell has Westfield playing with character, commitment”