Kyle Gibson now wears the colors of the Minnesota Twins and spends his off-seasons near the team’s spring training camp in Fort Myers, Fla. But the 6-foot-6 right-hander takes a piece of Greenfield, Indiana wherever he goes.

Gibson grew up in the Hancock County town located east of Indianapolis and learned lessons about baseball and life that he still carries as a fifth-year major leaguer.

Harold Gibson, Kyle’s father, was part of a group that started the Indiana Bandits travel team in 1996.

“That was at the beginning of when travel baseball took off in central Indiana,” says Kyle Gibson, who went from a small, skinny kid to a starter in the Twins rotation. He is coming off a win Friday, Sept. 22 at Detroit. “I am where I am today thanks to that group of guys starting that for us.”

“I’m a big believer that God puts me in certain situations for a reason,” says Gibson of a procedure to repair a fractured growth plate. “I came out of that surgery my freshmen year following Christ as a much as ever.”

Kyle spent his freshmen season at Indianapolis Cathedral High School, coached by Rich Andriole (who recently was named head coach at Guerin Catholic High School), and the last three years of high school baseball at Greenfield-Central, where C.J. Glander was head coach and Harold Gibson — who pitched for the Cougars then one year at the junior college level — was a volunteer.

Kyle and Glander arrived at GC at the same time and by Gibson’s junior and senior seasons, the program was turned in a positive direction with the head coach’s attention to detail.

“He was really, really good at pushing guys he knew wanted to play in college,” says Gibson, who was Indiana High School Baseball Coaches Association All-Star Series MVP in Terre Haute in 2006. “He was also good with the guy who’s senior year was going to be their last playing baseball.

“He made sure to make it fun.”

More mature — physically, mentally and spiritually — than when he had his first surgery, there was a “Tommy John” ligament replacement for Kyle near the end of his second professional season (2011).

After three seasons at the University of Missouri, Gibson was selected in the first round of the 2009 Major League Baseball First-Year Player Draft by the Twins and he made his MLB debut for Minnesota at Target Field in Minneapolis on June 29, 2013, against Kansas City, surrendering two runs on eight hits in six innings pitched with no walks and five strikeouts, earning the win. According to the Elias Sports Bureau, the win and five strikeouts made him just the third Twin to win their big league debut while striking out five-or-more batters, the others being Hall of Famer Bert Blyleven in 1970 at RFK Stadium against Washington and Darrell Jackson in 1978 at Metropolitan Stadium against Detroit; they each had seven strikeouts.

Among those in the crowd that day were parents Harold and Sharon and current Greenfield-Central head baseball coach Robbie Miller (an assistant when Kyle was a Cougar). Kyle and Harold still have an impact on baseball in Greenfield as co-owners of a training facility at I-70 and S.R. 9 that caters to ages 8 and up.

“(Vitello) had a big hand in developing me as a player — physically and mentally,” says Gibson. “I still tap into all that information that they taught us (at Missouri).”

Kyle sent a text of congratulations to Vitello when he recently was named head coach at the University of Tennessee.

Kyle and Elizabeth Gibson have two children — daughter Hayden (3 1/2) and son Mills (9 months) — and plan to spend the off-season between Florida, family in Indiana and Missouri and also doing some mission work in the Dominican Republic with organizations like One Child Matters, Bright Hope Ministries and Help One Now.

While the Gibsons were away with baseball, their Florida neighbors put up storm shutters that kept out the wind and water of Hurricane Irma.

Right now, the Kyle and the Twins are focused on holding on to the second wild card in the American League and Gibson could be part of any postseason success enjoyed by Minnesota.

Currently 12-10 with a 5.02 earned run average in 28 starts with 115 strikeouts and 60 walks in 154 1/3 innings, Gibson said he is right when he can establish his four-season and two-seam fastballs and mix in his sinker, slider and change-up.

“The fastball is very important to me,” says Gibson, who has worked with Neil Allen as Twins pitching coach since 2015. “I’m working on locating it and getting ahead (in the count). I’m trying to get (hitters) to come out of their approach and make them make quick decisions.”

While he occasionally needs to elevate a pitch, Gibson tends to concentrate on keeping balls low to induce grounders and let his defense help him out. 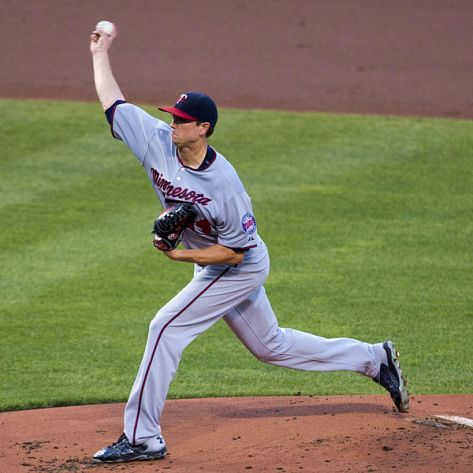 Kyle Gibson, a 2006 Greenfield-Central High School graduate, delivers a pitch for the Minnesota Twins. Gibson is in the starting rotation for a team fighting for a 2017 postseason berth. (MLB Photo)