Jeremy Richey was a football and baseball standout during his time as a student-athlete at Seymour High School.

As the Owls head baseball coach, he takes something of a football approach.

Richey, a 1999 SHS graduate who played both sports at Cumberland College (now the University of the Cumberlands) and baseball at Indiana University Southeast, keeps a large coaching staff busy with three squads (varsity, junior varsity and freshmen) on the school’s one baseball diamond — American Legion Field.

“They all have positions and they’re all working,” says Richey, who was an Indiana All-Star as a player and a football assistant for 12 seasons at his alma mater.

Jeff Richey — Jeremy’s father — was a football coach for 35 years, including nine as head coach at Seymour.

Richey, who played on the prep diamond for head coach for Bob Bowman and then Terry Stigall at Cumberlands and Rick Parr at IUS, heads into his seventh baseball campaign in 2017-18 with D.J. Henkle, Elvis Hernandez and Tim Perry as varsity assistants, Dan Henkle, Billy Rayburn and Justin Richey as JV coaches and Geoff Revalee and Brad Thompson leading the freshmen.

Upon taking the job, Jeremy sat down with a few of his coaches and formed the Owls’ belief system.

“We have five absolutes,” says Richey. “That’s who we are as a program.

“There’s Hustle, Compete, Self Discipline, Be A Leader and Character,” says Richey. “If we take care of those five things, the wins will take care of themselves.”

“We’re very competitive in our conference,” says Richey. “But more importantly we’re creating good young men. We’ve sent 13 young men to college in six seasons. We’re winning in the classroom and the community and getting pretty good results on the field.”

Richey sent Zack Brown to the University of Kentucky and he is now pitching in the Milwaukee Brewers system. They don’t all have D-I talent, but plenty of determination.

“We have a lot of gritty kids that do things the right way,” says Richey.

In his first season on the job (2012), the Owls went 21-5 and lost to Jeffersonville in the conference tournament and sectional final without hitting a home run all season.

Richey and his staff do a lot of work with players on situational hitting. The Owls employ the hit-and-run, delayed steal and bunts for hits.

“We stay on top of the ball and we make things happen.

“Small ball is big for us.”

His involvement with the IHSBCA also allowed Richey to work with Hobart head coach Bob Glover on a proposal to add a fifth class to IHSAA baseball. The idea stemmed from the big size difference between the biggest and smallest schools in 4A.

Richey said the idea likely did not gain traction since only one class would be impacted by the move.

While Seymour plays everyone in the Hoosier Hills Conference, a blind-draw conference tournament is the only thing that counts toward the HHC title. There is flexibility in the schedule that allows the Owls to decide whom they are going to play and when.

In recent years, American Legion Field (Post 89 is located in Seymour) has gotten a new scoreboard, more seating behind home plate and a brick wall and screen to replace the old-style fence backstop.

The Owls last won a sectional title in 1995. Seymour won a state championship with Bowman as head coach in 1988.

Richey, who teaches Economics and U.S. History at SHS, has been married 11 years to Seymour graduate Danielle. The couple have two children — Braden (10) and Brookyln (6). 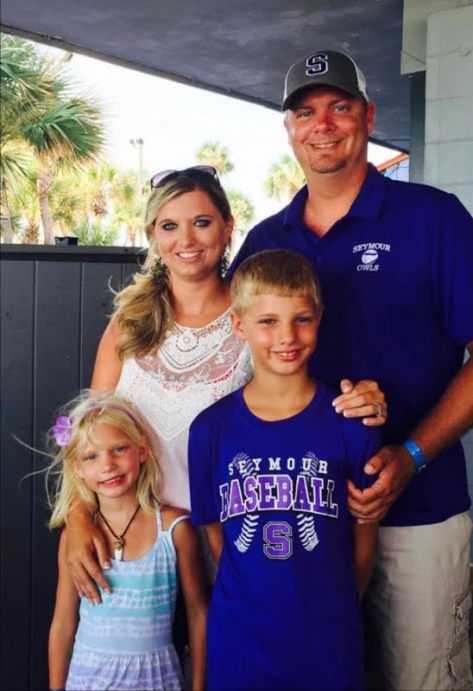