Respect for all the little things have led to big things at a little school.

Hagerstown was ranked No. 1 much of the season in IHSAA Class 1A baseball in 2017.

Catey spent his whole pre-college school career in Hagerstown (K-12) and graduated in 2000 before studying and playing basketball at Indiana University East in Richmond. He played several positions for Indiana High School Baseball Coaches Association Hall of Famer Lloyd Michael — shortstop as a freshman, second base as a sophomore, left field as a junior and catcher as a junior.

“I moved wherever Lloyd needed me to move,” says Catey, who was part of 1999 squad that lost to eventual state champion Evansville Mater Dei in the 2A Indianapolis North Central Semistate and also played football and basketball for the Tigers.

Third baseman Cory Childs was a 2A first-team all-state selection for Hagerstown in 1999 while pitcher Jesse Johnson earned that distinction in 2000.

Catey spent four seasons as a Hagerstown assistant before taking over for Michael with the 2012 season.

“He taught me to respect the game,” says Catey of mentor Michael. “We made sure we do the little things right. We always ran on and off the field. We backed up the plate. You give yourself a chance to win.”

Right-hander Bartlett pitched at the University of Missouri and was taken in the 25th round of the 2017 Major League Baseball First-Year Player Draft by the Arizona Diamondbacks. He is with the Missoula (Mont.) Osprey.

Hagerstown’s success got Catey a spot on the North coaching staff for the 2017 IHSBCA All-Star Series in Muncie, where he got to coach TEC Player of the Year Trey Kelley one more time before he headed off to Earlham College.

“That was an awesome experience,” says Catey, who served on a South staff led by Plainfield’s Jeff McKeon and also featuring Batesville’s Justin Tucker and Columbus East’s John Major. “I got to coach a lot of (NCAA) Division I talent.”

H-town goes back to 2A for the 2018 season — and likely the Cambridge City Lincoln Sectional field — with plenty of optimism.

“We don’t like to rebuild; we reload,” says Catey. “It makes my job a little easier.”

Hagerstown graduates Charles, pitching coach Dan Davis Jr. and outfielders coach Jay Hale (outfielders) are all expected to be part of the staff in 2017-18.

Hagerstown Little League has served as a high school feeder program for years. Many current juniors and seniors represented Indiana at the Great Lakes Regional when they were that age.

To help maintain the relationship with HLL, each high school player is required to umpire two games a year.

“That’s one of the reason we keep our numbers so high,” says Catey. who had 38 players on varsity, junior varsity and C-team squads in 2017. “For a 1A school, that’s really good.

“Most our guys have found a good travel team. We encourage our guys to find a little better competition.”

Among those travel organizations are the Hagerstown Heat, Indiana Prospects and Indiana Nitro.

Hagerstown had a number of quality arms to get through its schedule, including Kelley (Class of ’17) and Pyle (Class of ’18).

“It didn’t seem to effect us that much,” says Catey. “We had a lot of people we could use. Some other teams had to drop JV games because they had to use guys in varsity games.

“The biggest equation is the JV and varsity pitches they can pitch in a week.”

Catey leads students through simple equations as a math teacher at Hagerstown Elementary.

Recently, he has been teaching young girls how to slide. Oldest daughter Lilly (7) is an 8U softball player. Brad and Darcy Catey’s youngest daughter is Peyton (5). 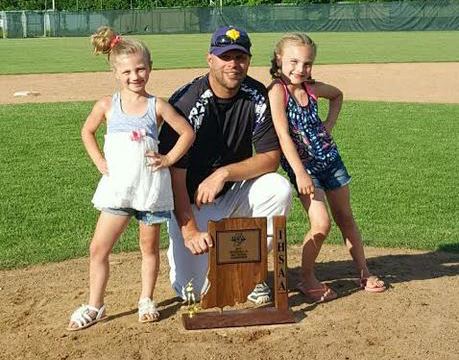