Those are concepts Eric Nielsen is establishing in his second season as Concord High School head baseball coach.

“I’m very structured,” says Nielsen, who followed the retiring Jim Treadway as leader of the Minutemen. “All our practices are planned out. We have times and we stick to those times. Guys hustle everywhere they go. We’re very disciplined and are going to play the game the right way. I teach them to respect the game. There’s no trash talking at all. I’m big on body language.”

It’s taken some time, but players are starting to come around to Nielsen’s way of doing things.

“You are starting to see people buying into that,” says Nielsen. “They know what’s expected. Seniors will get on guys if they are not doing things the right way. That’s less that I have to do because that expectation is there.”

Nielsen was an all-state catcher at Elkhart Memorial High School, graduating in 2004. He went to be a regular behind the plate at Purdue University. His first high school head coaching stops came at Mt. Vernon (Fortville) and Knightstown before he moved back to north central Indiana.

Along the way, he has learned how to read his young athletes.

“I’ve learned really well how to manage the players,” says Nielsen. “I think that’s why (Chicago Cubs manager) Joe Maddon is so good at what he does. He’s not managing baseball, he’s managing people. In the olden days with (LaPorte coach) Ken Schreiber, it was this is the way it is and if you don’t like it ‘see ya!’ It was hard-nosed and it was tough.”

And while Nielsen considers himself a traditional, hard-nosed guy, he knows he has to motivate in a different way and keep his players engaged.

“If you know the game of baseball and you can build relationships, you’re going to be very successful, pending you have the talent,” says Nielsen. “I’ve seen teams that have the talent but they never go anywhere because they are so done with the season by the time the state tournament comes around. They’re cashed out.”

A syndrome that baseball and other spring sports face is a loss of focus because it’s the end of the school year. For 12th graders, they call it “senioritis.” But other grades — and even coaches — can get it, too.

Nielsen insists on holding out a carrot for his players.

“You’ve got to have them chasing something,” says Nielsen. “If you don’t, they’re going let up.

Nielsen looks at his 2017 team and sees pitching depth. At least nine of 12 varsity players can take the mound.

“The hard part is finding out who is my No. 1 and No. 2, who’s my best reliever,” says Nielsen. “We’re still in the process of finding that out.”

Along with pitching coach Mike McGregor, Nielsen looks at pitchers not only in terms of physical talent but what’s happening between the ears.

“We’re trying to teach mental toughness on the mound,” says Nielsen. “If we can have guys that will compete, saying ‘I’m going to strike this guy out.’ Even if they don’t, they are going to distinguish themselves from the rest of the players.”

What about the new pitch count rule?

“I thought it was going to be a bigger issue than it has been,” says Nielsen. “I traditionally don’t have guys throw that much anyway. I don’t push the 120 spot. As long as they’re under 80, I know how many days they need off.

“I thought I’d be juggling a lot. It hasn’t been too bad.”

Nielsen said the pitch count rule will likely be more of an issue during the IHSAA tournament series than the regular season.

“People are going to watch that really close,” says Nielsen.

Concord spends plenty of time at its regimented practices on “small ball.” The Minutemen work on moving runners with the bunt.

“We don’t have anybody on the team we can rely on to hit the long ball yet,” says Nielsen.

Something that Nielsen established in his first season at Concord was an Armed Forces Day (Concord Baseball Armed Forces Day on Facebook). It was such a hit, the Minutemen will be pay tribute to those who have served Saturday, May 6 when South Bend Adams visits for a 10 a.m. game.

As a social studies teacher at CHS, he also gets a chance to tell students about the importance of the military.

“It’s good to show the kids what these guys are doing day in and day out for our country and show them appreciation for the sacrifices that they make and have made for our freedom,” says Nielsen, whose other assistants are Sean Sears and Nic Minder.

The Minutemen compete in the Northern Lakes Conference (along with Elkhart Memorial, Goshen, Northridge, NorthWood, Plymouth, Warsaw and Wawasee). The double round robin NLC race began this week. 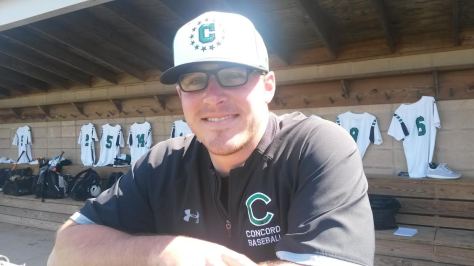 Eric Nielsen, a 2004 Elkhart Memorial High School graduate, is in his second season as head baseball coach at Concord High School. He was a catcher at Purdue University.